Unfortunately Jack had to work Saturday and that messed up our plans to go to Cathy’s house this weekend. That left me with not much to do as I had the house totally cleaned and all the laundry done. I thought about looking into body shop supplies to see what we can do with the hood on the car that got in the accident. Instead I got my hair cut but that only took up 2 hours of my weekend.

Actually, Jack working and us staying home turned out a good thing because we might have missed the opportunity to bring such an adorable creature into our lives! And by adorable, I mean, the “so-ugly-it’s-cute” kind of adorable. 🙂 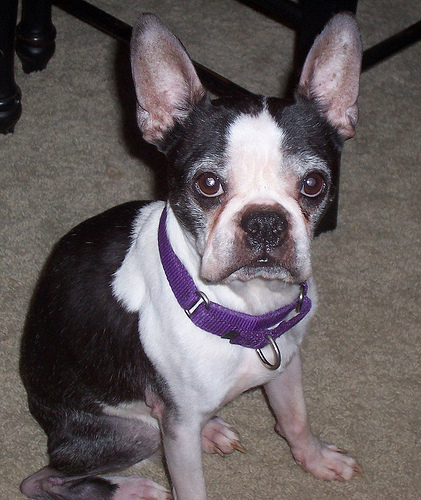 Short story version: She was found 7-8 years ago by my mother running the streets of Portland. My mom worried for her safety and coaxed her to her. There was no one around to claim her so she took her home, called animal control, the humane society, and vets in the area. No one reported a missing pure bred Boston Terrier. She then took an ad out in the paper. The only call she got was a man looking for his male Boston Terrier. No one ever claimed Cass, so she became a member of our family.

After an unfortunate incident with my mother’s greyhound dogs that almost cost Cassie her life, she went to live with my brother. He recently moved and couldn’t take her. So to us she’s come to live. We were a bit hesitant, and Jack was downright against it. But, Cassie turned on the charm and ‘cuted’ her way into Jack’s heart (as he called it). After only two days he’s as smitten as can be with her and can’t wait to get her a coat so she won’t shiver so much when she goes outside. It was a hilarious transformation to watch him go through. “NO we can’t keep her!” to “We should get her two sweaters: one for outside and one for inside”. 🙂

She’s somewhere between 10-14 years old and absolutely loves kids. She follows them everywhere and if allowed would lick them incessantly for hours on end. They in turn adore her. First thing Casey and Cody did when they got home from school was run through the house looking for her. She was perched on her new favorite place: Kevin’s lap of course. 🙂

And yes, that means we now have a Kevin, a Casey, a Cody, and a Cassie in the house. And at times a Kayla and a Katherine, too! This is going to be fun!

7 thoughts on “A new family member”